Jimbanqua in the P’urhepecha Plateau shares its Passion for Life 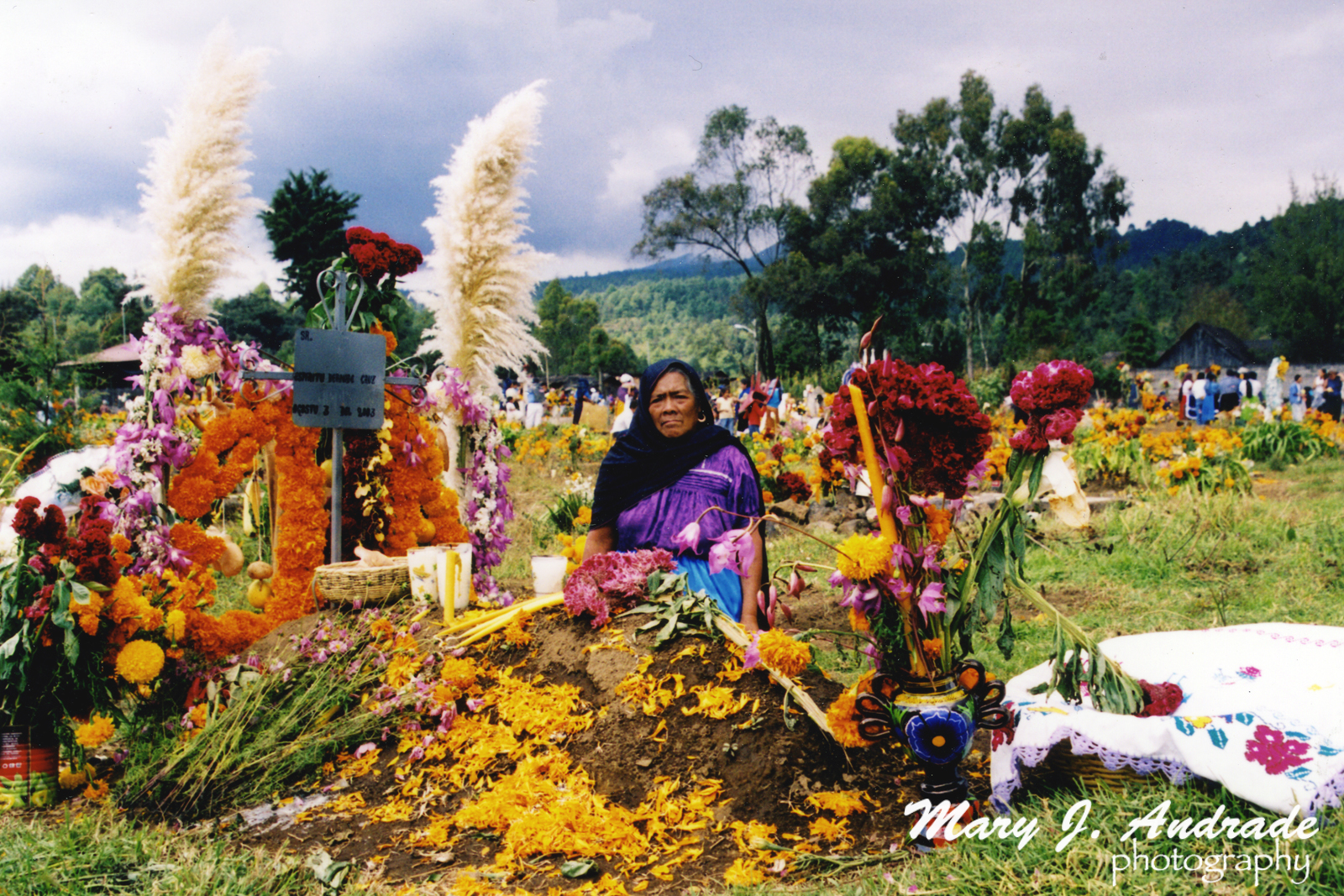 From the bilingual book “Day of the Dead, A passion for Life.”

It is a pleasure to let oneself travel down the paths that open up before one’s gaze, especially those that lead to the villages that are found bordering Uruapan.

A few kilometers outside of this city, the second most important in the state of Michoacan, the P’urhepecha plateau, covered with avocado trees and corn, and surrounded by a mountain chain, presents a landscape that opens up into plains.The plateau population seems to be frozen in time, and reaching them represents the clear possibility of discovering cultural treasures, that the settlers (trustees) watch over with special care.

Uruapan is the doorway to the P’urhepecha plateau, a region where old villages are situated. These beautiful handcrafts reflect, through their tonalities, the cosmovision of their inhabitants and their intimate relationship with the colors that nature provides.

The difference of the celebration between the lake area and the plateau is very pronounced.

According to Luis Daniel Benites Perez, from the Cultural Development Office of the City of Uruapan, it is confirmed that the indigenous communities that speak Purepecha are the ones that maintain the belief that the souls will arrive during the celebration of Jimbankua, or newly deceased. It is fundamental for its inhabitants to celebrate their dead. It is about a spiritual commitment, similar to the celebration they are accustomed to making in honor of a saint, during the local holidays.

The plateau extends from Tingambato to Charapan and four areas compose the Purepecha region: the Lake Zone, the Cienaga or Zacapu (swampland), the Cañada (the gully), and the Purepecha plateau, also known as the mountain range.

The historian, anthropologist, and teacher Blas Ramirez Vidales, points out that to understand the significance of the Jimbankua rituals one needs to start by observing what death means among the Purepechas. Instead of being a somber event or a profound tragedy as it is in other cultures, in the mountain region, death is celebrated as part of life.

It is a celebration because for the P’urhepecha, before the arrival of the Spaniards, there was no concept of hell. Their universe was divided into three parts: heaven, earth, and the world of the dead, located beneath the earth. For them, said world was similar to paradise, or the Christian Heaven, like going to a camp, a place of joy, of happiness. It was the evangelists who, in the 16th century, instilled the belief in heaven and the terror of hell. However, they also knew intuitively that they should not clash with the natives’ customs and cultural ways, and that it was necessary to merge them with the European ones, in that way producing the syncretism that is lived day to day in that region, where the ones who have died are venerated and remembered with joy, with the conviction that they are happy wherever their souls are found.

Anticipated offerings for the accompanying persons

About eight days before the celebration of the Santos Difuntos (Blessed Deceased), the relatives buy pastry, candy, and boxes of seasonal fruit, and arrange trays on which they place a little of everything. They go to the homes of the persons who accompanied them during the funeral, knock on the door, and present it, saying: “I bring the offering from Leon, who died about three months ago.”

The belief that death is only a step toward another level also commands a celebration. On both the first and the second of November, special dishes are prepared to share with the ones who come to accompany the relatives in the second vigil, this time without the body of the deceased. This food will be the same and will be placed in the offerings, besides the calabaza en dulce (pumpkin in syrup), chayotes, peaches, guavas, and whatever else the deceased liked.

Symbols of the celebration of the Jimbanqua

Honoring those who died in the current year involves many people in each of the aspects of the celebration. The same thing does not happen with the deceased of years past, who simply receive an offering at the main altar of their home.

Bertha Alicia Cruz Ramon, Cultural Promoter of San Lorenzo, a town located 23 kilometers away from Uruapan, indicates the importance of the flowers at the Jimbankua celebration as part of the symbols that most stand out at this celebration dedicated to the newly deceased. The area has four traditional ones. The first of them is a seasonal orchid, the joskuatsitsiki, or starflower, with purple and white hues. This flower, which blooms in the high hawthorns and black holm oaks, represents the spirit of the deceased who, upon return to the sun, is converted to a star.

Another one of these seasonal orchids is the parakatatsitsiki, or butterfly flower, yellow with brown hues, which blooms as a parasite flower and by nature’s analogy represents man’s psyche. The swarms of butterflies that appear in this season are related to the parakatatsitsiki, and the belief that the souls of the dead return in this form to participate in the celebrations. 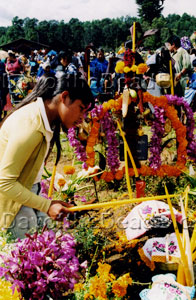 Another traditional flower of this celebration is the tiringuitsitsiki, whose aroma is a little better than the aforementioned. It is purple, with pretty markings. It’s yellow color also represents the gold color of the Átomo Divino (soul).

There is also the k’etsikarhani, which is the cempoaxochitl, symbolic at a national level during this celebration among all the ethnic groups. Its root signifies life, and includes all cosmovision. It is an appropriate flower to place on the table, where the deceased will sit to “taste” the food that is offered to them on this occasion.

To order any of the publications by Mary J. Andrade, please return to the Home page and click on “Books of Day of the Dead” banner.

Topics: Day of the Dead Jimbanqua Mexico Michoacan
Previous Post The clatter of enthusiastic skeletons in Mexico City
Next Post Jimbankua in the Purhepecha Plateau shares its Passion for Life