An Anciente tradition of the Island of Janitzio 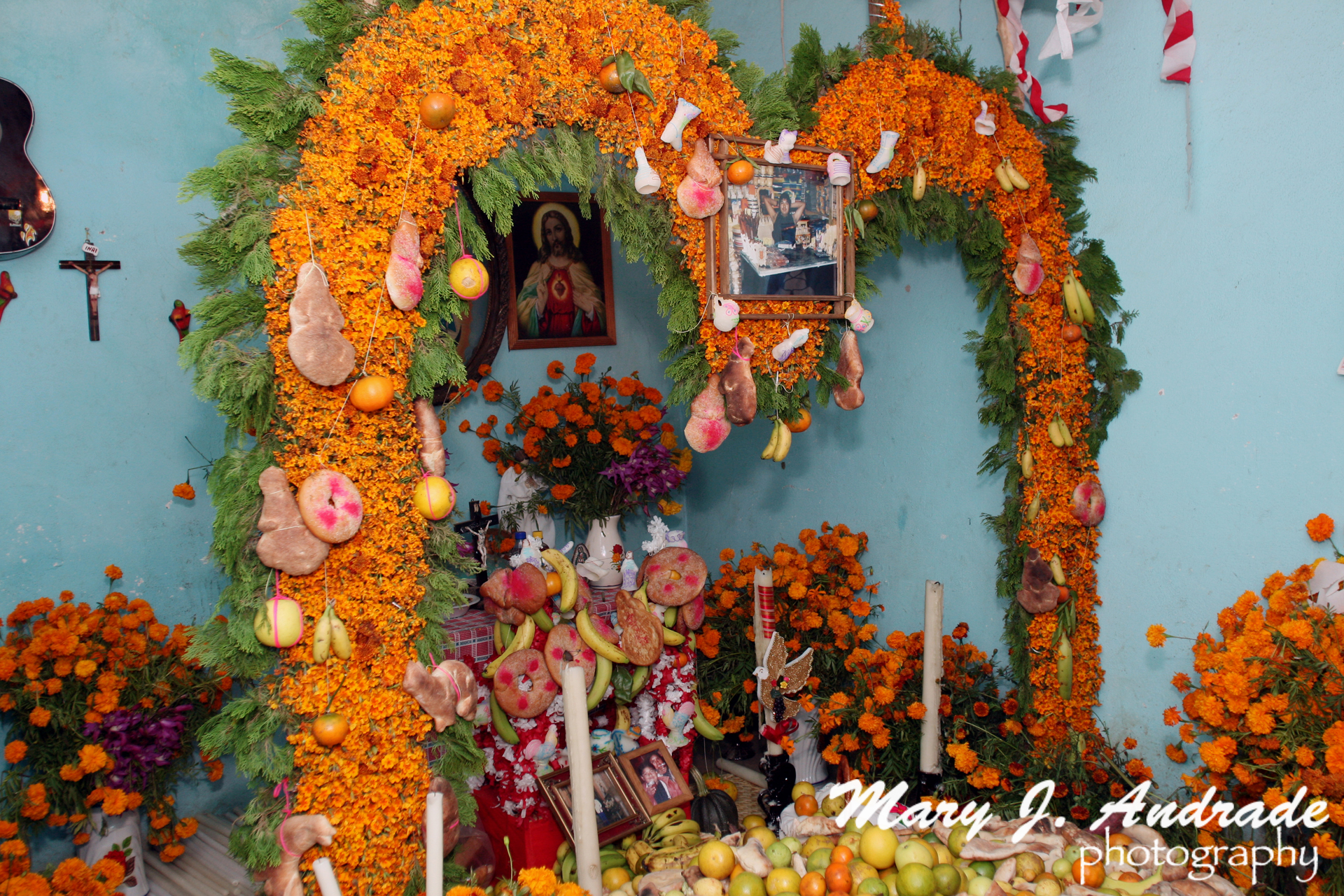 From the bilingual book “Through the Eyes of the Soul, Day of the Dead in Mexico – Michoacan.”

The Day of the Dead, also known as All Souls Day, is celebrated in México and in all of Latin America on November 2nd. In the larger cities, Catholics attend morning Mass and then gather at cemeteries to cover the tombs of their loved ones with flowers and prayers.

However, a very special ceremony that is a blend of the religious and the pagan is held on the Island of Janitzio in the State of Michoacan. This is an annual ceremony that reaches across borders and attracts thousands of tourists.The tourist who is fortunate enough to witness the preparation for this notorious event that is also celebrated in Patzcuaro; is left with an unforgettable experience. Patzcuaro is located on the bank of the lake that bears the same name and 312 kilometers from the city of Guadalajara, the second largest city in the country of Mexico.The ancient P’urhepecha chose to establish themselves in the lush region of Michoacan in the XIV Century. It was the center of their kingdom. Local folklore has it that, “the blue gods of water lived in this region.”Patzcuaro was the metropolis for many years, but it later became a recreational site for the nobility that lived in Tzintzuntzan, under the rule of Tzitsipandacuri.

During the XVI Century, the Episcopal seat was bestowed to Don Vasco de Quiroga. Quiroga later moved to Valladolid, taking the Episcopal seat with him, but this Christian influence made its mark on the area.
The men and women of this town have actively participated in the different epochs of the history of Mexico. Without a doubt, the attraction of Patzcuaro is rooted in the pure Spanish architecture that has survived through the ages. Indeed it was so beautifully designed that Don Vasco de Quiroga hoped to make it the capital province of Michoacan.

Because of this architectural beauty, it is good to be there ahead of time for the celebration on the Day of the Dead. Indeed, it’s advisible to make reservations at least one month in advance since the cultural events that start on the 28th of October, attract many people. It could be said that a major attraction is the opportunity to participate in the Tianguis, which is a craft fair where one can purchase flowers for the altars that are placed on the tombs on the first of November. It is very easy to pass time observing the beauty and the completion of Michoacan craft, all the while lamenting one’s inability to buy up all one desires in Christmas ornaments and colorfully decorated confections. The general atmosphere is one of fiesta.

You get to the Island of Janitzio by boat. The fishermen put on a lavish show to welcome tourists, performing impressive demonstrations with their butterfly nets. At the summit of the island, the stone statue of Morelos dominates the view, with its out-stretched hand extending a welcome to native and foreigner alike.

On this island, just as in the town of Ihuatzio, Tzintzuntzan, Huecorio, Jaracuaro, Zurumutaro; the pagan rite is mixed with the religious ceremony creating, at one instant, an atmosphere of joy and sadness.

The Vigil of the Little Angels takes place on November 1, between the hours of 7 and 10 a.m. This is an incredibly moving ceremony that stands in strong contrast to certain modern ideas. It takes place in the entry of the church of the Island of Janitzio. Where the mothers and brothers and sisters of those who did not come to know the joys and sorrows of adulthood, gather to mourn. Beautiful floral decorations are formed at the tomb of the little ones, and toys made of wood, tulle, and straw are left at the gravesite. The toys that they did not receive while they lived, adorn the altars on the day of the Vigil of the Little Angels.

In order to catch this ceremony, it is important to take the first boat to the Island; because upon arrival one still has to rush to the cemetery by foot.

The P’urhepechas are considered one of the most ancient inhabitants of the region. Since their arrival in the land of Michoacan, they have lovingly cultivated flowers and they have used them in different activities of their religious and civic life.

Early on the first of November, the homes, restaurants and craft markets can be seen festively adorned with this yellow flower. Even the nets of fishermen are adorned with cempazutchil.

The tourist has quite a few hours to use after the Vigil of the Little Angels. This time can be used to run around the island, or better stated, to ascend the island. While traveling through the streets, one can hold up and rest in one of the restaurants and enjoy some of the typical food faire.

As part of the celebration of the Day of the Dead, the Teruscan celebration takes place at night. This is a ritual game played by the Tarascan youth during the first hours of the evening during which they “rob” ears of corn, flower, fruit, and squash from the roofs and fields of the houses. All of this is done in jest and merriment, in that it is an event that is organized with permission of the authorities.

While the youngsters steal, the adults wait for them in the portico of the Temple or in the Guatapera (a communal house of the Tarascan people). The “loot” is cooked in a large kettle and it is served to the participants as part of the activities of the vigil.Around 12 midnight, and after a musical performance that is held at the foot of the statue of Morelos, the women and children begin their solemn pilgrimage to the cemetery. Once they locate the place of rest of their loved ones, they deliver the food that was the pleasure of the deceased. They place the offerings that are adorned with fruit and sweet figures at the gravesite, the light candles, and they sit and pass the night praying and singing. Men are not allowed in the cemetery, so they observe what goes on from the gates.

Although this same ceremony occurs in the entire region of Lake Patzcuaro, this island is the one that attracts the most attention. This must certainly be due to the impression created by the beauty and form of the outstanding white buildings with their red tile roofs; or perhaps it’s because of the legend that says that the ghosts of Mitzita, the daughter of King Tzintzicha and that of Itzihuapa, the son of Tare – prince and heir of Janitzio – rise up on that night.

The prince and Mitzita shared a passionate yet unrequited love, due to the unexpected arrival of the conquistadores.

The king, father of Mitzita, was arrested by orders of Nuño Guzmán. She hoped to give the fabulous treasure that lied deep in the waters between Janitzio and Pascanda in exchange for her father’s freedom. When her beloved Itzihuapa went by force to get the treasure, he was overwhelmed by 20 shadows of boatmen who hid him beneath the water and stayed with him. Itzihuapa became the twenty-first guardian of these fantastic riches.

On the night of the Day of the Dead, all the guardians of the treasure awake to the sound of the melancholic toll of the bells of Janitzio, and they climb the steep slope to the island. The royal Mitzita and Itzihuapa go to the cemetery to receive the offerings of the living. Beneath the silver luster of the moon, the two ghosts whisper tender words to one another, and behind the uncertain candlelight they hide from any indiscreet look.

Let no one interrupt their loving colloquy.

Dressed in her finest with a delicately embroidered apron and shawl, the P’urhepecha woman passes the night keeping vigil. Later, she will take a trip back to her home to return some of the offerings and leave them at her private altar. Visitors are served some of the food offerings from the cemetery.

On the morning of the second of November, the Campanari (offering of the fruit of the harvest) takes place. The gathering is done by the same youngsters who participated in the Teruscan the evening before, only on this occasion, they do not “rob.” It is a donation that is proclaimed and announced in the loud voice throughout the streets of the town – “Campanari, Campanari, Campanari.” On the evening of the same night, the fruits of the households are delivered to the priest who responds from the temple.

It is practically impossible to find a place to sleep, although after all is said and done who would be interested in sleep? The celebration is so grand, that the tourist is unaware that he has gone without sleep for more than 24 hours.

Upon leaving the island, one becomes aware of the sense that something is missing; that a part of oneself has stayed behind; that it is necessary to return to witness these ceremonies again. Thus, one can become more enmeshed in what the real meaning of life and death is for the townspeople. Because the Day of the Dead in Janitzio is magic and reality, paganism and Catholicism, joy and sorrow.

To order any of the publications by Mary J. Andrade, please return to the Home page and click on the “Day of the Dead Books” banner.