Mexico celebrates Life during Day of the Dead 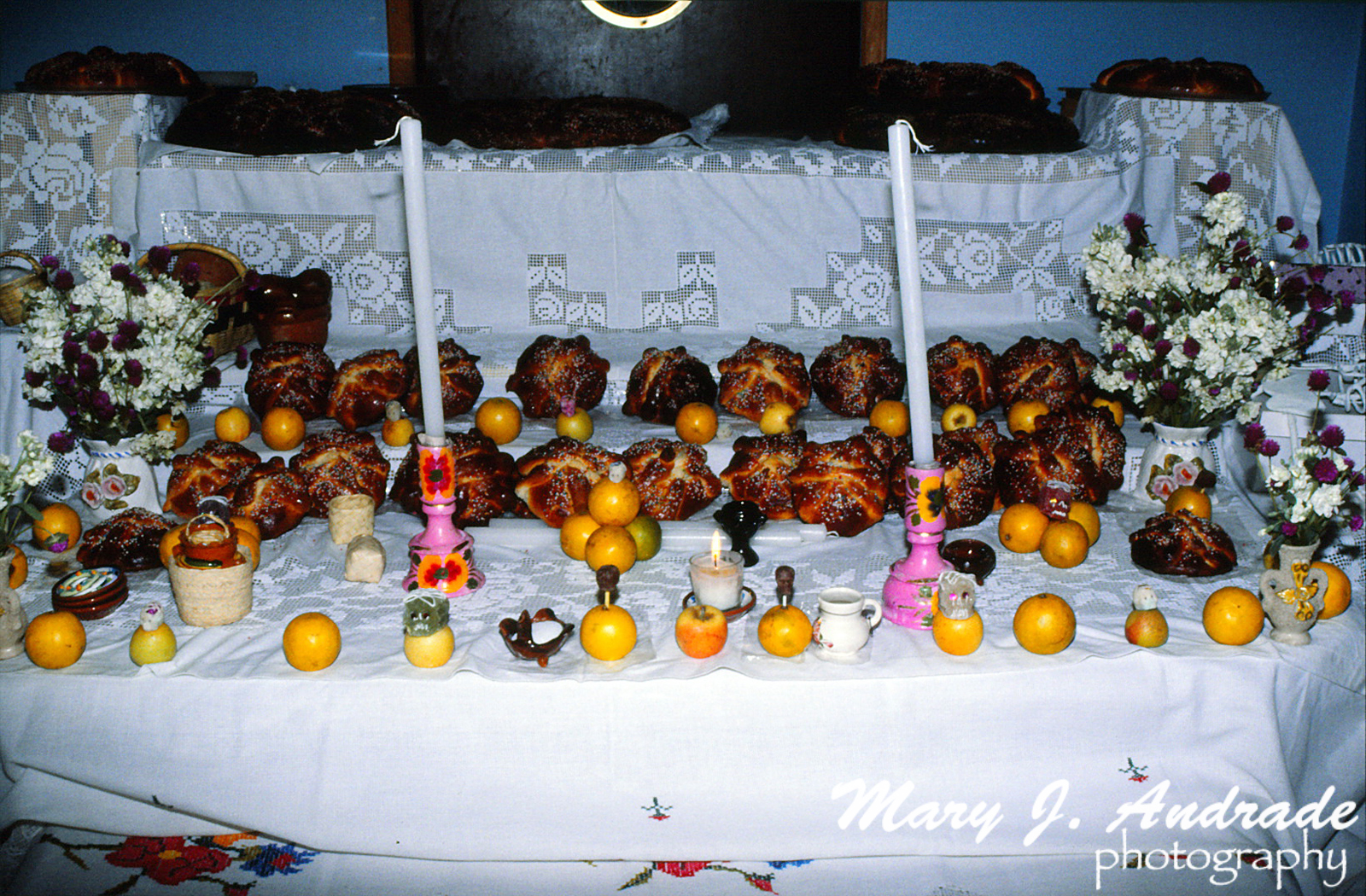 Happiness, tradition and memories surround festive holiday commemorating those who have passed away

Mexico Tourism Board — Mexico’s Day of the Dead extended holiday is a unique celebration of life that unites the country on Oct. 31 (Young Souls Day), Nov. 1 (All Saints Day) and Nov. 2 (All Souls Day).

With each state paying homage to deceased loved ones in slightly different but equally colorful ways, travelers can witness incredible displays of tradition and culture wherever in Mexico they choose to visit.

The Day of the Dead observances were born in prehispanic Mexico, and stemmed from the indigenous beliefs shared by the Aztecs, Mayans, P’urhepecha, Nahua, Totonac and Otomi that the souls of the deceased return annually to visit living relatives and eat and drink with them. These ancient cultures all celebrated the return of their dearly departed with festivals and fanfare.

Day of the Dead alive and well today 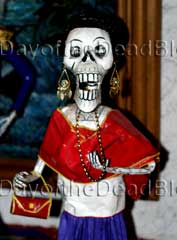 From dancing Calacas (skeletons) to chocolate coffins, today’s Day of the Dead celebrations continue the festive tradition and are alive with activity because in Mexico, loved ones don’t ever truly die.

Families gather to honor their ancestors through ofrendas (altars), typically decorated with cempasutchil (marigolds), candles, photographs of the departed and the deceased’s favorite foods and beverages, as well as many other small trinkets, including small coffins, often with pop-up skeletons. These altars range in size and are placed both in homes and at the gravesites.

Calaveras (skulls) form an important part of today’s Day of the Dead celebrations. Originally, skulls and skeletons were represented in the art of prehispanic Mexico, particularly the Aztec civilization which ruled much of Mexico at the time of the Spanish conquest. 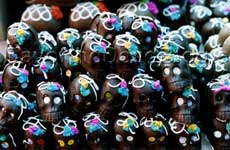 The skulls became part of popular culture and moved into the mainstream in the 19th century when Mexican artist Jose Guadalupe Posada (1851-1913) placed them in everyday situations in his satirical political artwork that commented on the corruption and social inequities of his time. In Posada’s more than 900 drawings, politicians and legendary figures inhabited a world of skeletons and skulls. 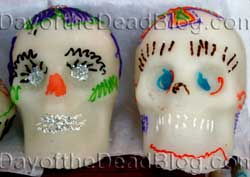 Sugar skulls are another important part of the altar, and are decorated with paper foil for eyes and colored icing for hair. Names can be added to the skull and Mexican children often exchange named skulls with their friends. Sweets and candy skulls are traditionally intended for the angelitos (little angels)—the young souls of departed children, who return to earth in the late afternoon of Oct. 31.

Another Day of the Dead must-have is pan de muertos (bread of the dead), made with anise, sugar, butter, eggs, flour, yeast and orange peel, and decorated with strips of dough simulating bones. 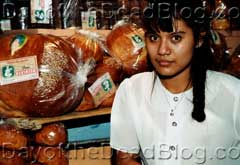 It is tradition for families to come together and share bread in remembrance of their deceased loved ones. Another traditional dish during this holiday is the tasty calabaza en tacha (candied pumpkin), prepared with cinnamon and brown sugar.

Below an overview of some of the more lively and well-known Day of the Dead celebrations.

Residents of the Yucatan Peninsula call their festival Hanal Pixan, a feast for all souls, and capital city Merida is at the heart of this celebration. Everything starts at cemeteries as families come together to clean and decorate loved one’s graves in preparation for their visit. The first souls to find their way home are the children, Pixanitos, who return Oct. 31, with the adults, or Pixanes, soon following on Nov. 1 and 2. 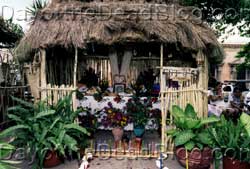 The celebrations include the deceased’s favorite foods and candies, and these are placed on tables with long white cloths. Other common offerings to the departed are ceramics, images of saints, flowers, candles, cigarettes, candies and a variety of traditional foods and drinks. Groups of families unite to prepare pibipollo, a seasoned chicken tamale wrapped in plantain leaves and cooked underground in a pit barbeque. On Nov. 7, families return to the cemetery the withered flowers and plant new ones. For more information, visit www.yucatan.com.mx.

Area stores stock early with candles, paper flowers, candles, fireworks, tobacco, bread, candy, chocolate and coffee because residents start building the cempasutchil arches that frame their alters by Oct. 30. These alters, which represent the way in and out of the underworld, are lit from above with candles and incense and feature flower petal carpets to help guide the spirits back to the side of the living. 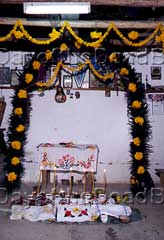 The first offerings are made for the departed children who are given chocolates, yucca, sheets made with pumpkin seeds, pork and chicken cuatzam (tamales). Children also receive corn and bean seeds to promote fertility, salt for those who have not been baptized and water for those who come back tired.

All Saints’ Day is celebrated by the lighting of incense and traditional dances that last the entire night. On Nov. 2, families go the cemetery to clean and decorate their loved ones’ graves. It is believed that the spirits enter the land of the living at this time and leave on the last day of the month, when families return to the cemetery and redecorate the new homes of their loved ones. For more information, visit www.sanluispotosi.gob.mx.

For one of Mexico’s most colorful and magical displays of Day of the Dead, visit Oaxaca City in Oaxaca. Local markets burst with preparatory activities, and playful skeleton imagery adorns storefronts and home windows. 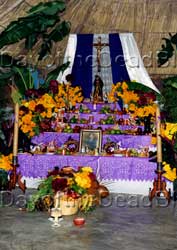 The festival formally begins on Oct. 31, where families pay honor to their ancestors or deceased loved ones by creating elaborate in-house altars. Over the years, the altars have evolved into objects of art, and homes are open to those interested in paying homage to their dead, making this celebration a true exhibition.

Throughout the three days, the city arranges events at the local San Miguel Cemetery, such as exhibitions, altar competitions, music and prayers for the dead. In Oaxaca City’s zocalo (main square), competing groups of students mold giant three-dimensional sand paintings depicting tombs, skeletons, ghosts and other aspects of death.

Another mainstay during the festivities is the Oaxacan mole negro (black mole), a rich sauce consisting of more than twenty different spices and considered the “king of moles” in the region. Typically served in tamales, the savory paste is enjoyed by both the living and the dead. For more information, visit www.oaxaca.gob.mx. 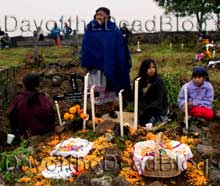 In the heart of southern Michoacan State is Lake Patzcuaro, home to the island of Janitzio, which is accessible only by boat. The island of nearly 1500 inhabitants is renowned for its impressive and colorful Day of the Dead celebrations.

Pre-preparations abound as many families even grow their own cempasutchils, believing that doing so is more appropriate for their offerings. The squares fill with stands that offer all types of colorful figures allusive to death, the most popular made of sugar.

At night, boats are decorated with candles and flowers, loaded with local villagers and visitors who are taken to the island’s cemetery. There they spend the night, summoning back the dead in celebration as the sounds of bells ringing, people chanting and the smell of incense fill the air. The following evening, fishermen paddle their torch-lit canoes around the lake, where they do a performance of butterfly net throwing. 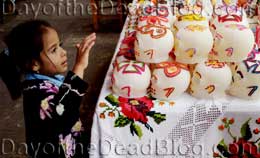 Once the sun sets, the dancing begins. The Danza de los Viejitos (Dance of the Old Men), native to Michoacan State and believed to date from prehispanic times, is performed as a ritual honoring the Sun. For more information, visit www.michoacan.gob.mx.

Only 25 miles southeast of Mexico City is the village of Mixquic, a magnet for visitors and locals during Day of the Dead. The area takes on a busy and festive air in the final days of October as merchants set up street stands to hawk their wares for the Day of the Dead. In the cemetery, all family burial plots are elaborately embellished with an array of earthly delights in the hope of luring departed spirits.

Each year, a street fair is held from Oct. 30 to Nov. 2 that fills the village streets fanning out from the main plaza. Similar to the Halloween tradition in the United States, on the night of Oct. 31, children go from house to house asking for goodies. Most homes have large, intricate altars for Day of the Dead. Children kneel at the altar and recite prayers before being offered food-gifts. Then, they move on to the next home repeating the same ritual of kneeling and prayers. To light their way, children carry carved green and white chilacayote (squash), which look incredibly similar to jack-o-lanterns. 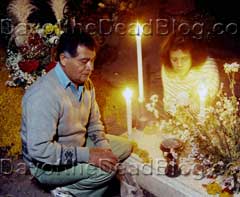 As darkness falls upon Mixquic, the glow of thousands of votive candles illuminates the way for the dead. At midnight they are called home with the mournful tolling of bells. Then each soul is lovingly remembered with recitations of the Rosary. The food-laden street fair roars outside the church graveyard, villagers descend upon the cemetery with food, drink, candles and cempasutchil. For more information, visit www.tlahuac.df.gob.mx/turismo/.

About the Mexico Tourism Board
The Mexico Tourism Board (MTB) brings together the resources of federal and state governments, municipalities and private companies to promote Mexico’s tourism attractions and destinations internationally. Created in 1999, the MTB is Mexico’s tourism promotion agency, and its participants include members of both the private and public sectors. The MTB has offices throughout North America, Europe, Asia and Latin America.