Through the Eyes of the Soul, Day of the Dead in Mexico – Puebla, Tlaxcala, San Luis Potosi, Hidalgo 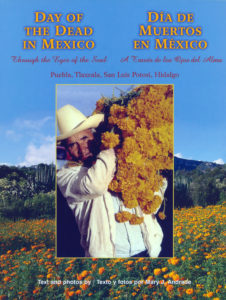 Written in English and Spanish, this fourth book in the series explores the regional variations of Day of the Dead in the interior of Mexico. Mary Andrade’s award-winning writing and photography transports us to Mexico and makes us visitors at this historic festival.

The book includes essays and over 140 color photographs portraying the way the dead are honored, starting with the buying of food, candles, incense, and flowers in the market place to the preparation of the special dishes placed as offerings on the altars and arches of Xantolo.

The book captures the similarities and differences of the celebrations in Puebla, Tlaxcala, San Luis Potosi, and Hidalgo. Architect Concha Nava of San Luis Potosi comments about this tradition: “For the Huastecan people, celebrating the dead is celebrating life. According to their beliefs, the best way of explaining their preocupation with life is through existence of the cult of dead.” 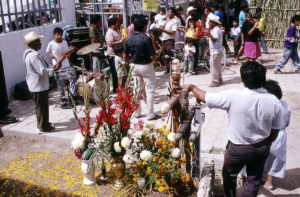 “San Gabriel Chilac, Puebla, has a special date with death every year on the 1st and 2nd of November. Its residents eagerly attend this reunion, during which the entire family celebrates the spiritual return of loved ones who went ahead on the road to the afterlife.

From different parts of the country and abroad, natives of Chilac return to join their family in welcoming the souls that arrive to receive their love and respect.

San Gabriel Chilac is located to the southeast of Tehuacan and is the second most important city in the state of Puebla.  It has a population of approximately sixty thousand residents with Nahuatl-Popoloco roots and who are bilingual, speaking Nahuatl as well as Spanish. It takes about two and a half hours to get from Puebla to San Gabriel Chilac on Highway 150.

The early settlers chose this region, blessed by nature with fertile soil and an abundance of water. They survived by growing high quality garlic with superior odor and taste, as well as tomatoes, corn, sugarcane, squash and other crops.  The progress that the town has made is due in part to the unyielding work ethic of its people. 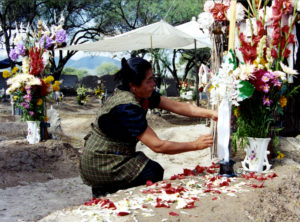 Just as they celebrate their daily lives with hard work — men in the fields and in commerce and women at home making and embroidering dresses —they celebrate death with equal religious fervor and motivation.  It is said that residents of Chilac are not afraid of death but rather they see it as an inevitable step towards eternity and towards a life that is superior to this one.

The sense of the duality of life and death in this world and the certainty that life will continue in the world beyond are firmly rooted in the hearts and minds of these people.  The celebration of the dead is another opportunity to give recognition to the Creator and to relive the memory of our ancestors.

The offering is a profound expression of love. This expression that is so important to the Mexican people, is felt more strongly in communities like San Gabriel Chilac because of their distance away from the big cities, where modern trends tend to alter traditions.

Prayers are said for the deceased, who are welcomed with honor by constructing altars with special offerings at home.These offerings are later taken to the cemetery as a second act of homage and co-existence with the souls.  It is a spiritual and physical surrender and communion, a unique form of expression.” 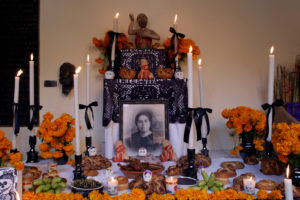 Choreographer and Dance Anthopologist, Elena Robles, writes,“Many indigenous communities still believe that the souls of the dead are granted the right to return to their origins for a visit each year to celebrate a family reunion for several days in November. The season is richly punctuated with traditional dances and music, some more contemporary in nature and others of ancient roots.”

Through the Eyes of the Soul, Day of the Dead in Mexico ~ Puebla, Tlaxcala, San Luis Potosi, Hidalgo ~