Day of the Dead in Mexico City 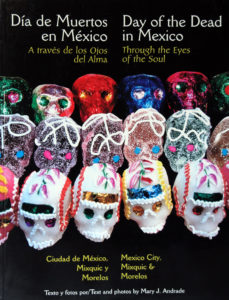 Written in English and Spanish, the third book of the series explores Day of the Dead in the metropolis of Mexico City, and also includes Mixquic and Morelos. The author shares vibrant and lively rituals that honor the dead, which are unique to that region.

More than 120 color photographs accompany a written description of the celebrations in Mexico City, Mixquic, and several towns of the state of Morelos. The book includes details of the tianguis (markets), of the special dishes prepared for offering, of the building of the altar and of the vigils at the cemeteries, which all create a vivid testimony of the strong influence of this pre-Hispanic tradition.

“As in the small towns of the provinces, most residents of Mexico City begin preparations early in order to properly celebrate the return of the souls. In many places near the capital, the production of candy starts in May and ends in October. Adults and children alike, savor the sweets and glazed fruit from Toluca, capital of the State of Mexico, as they walk through the stands. 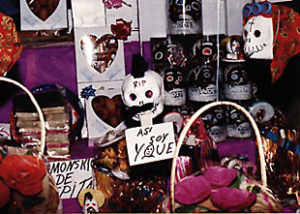 “Different size chocolate skulls capture the attention and imagination of passers by. Candy skulls, beautifully decorated with crowns fit for queens, invite us to assess and ponder the futility of accumulating material goods; and, in a paradox, tempt us to buy and show off these unique candies.

“The cultivation of cempasuchitl (marigold flowers) starts on June 13th of every year; on August 13th the shoots are transplanted to the ground, and the flower-gathering begins around October 20th. Trucks pile onto the freeways loaded with cempasuchitl from Atlixco, Puebla, blinding the drivers of other cars with their brilliant yellow-orange color. For the buyers who take these flowers to their homes, any means of transportation is good: the handlebars of a bicycle, a wagon pulled by donkeys, or the trunk of a car. What is important is to obtain the cempasuchitl and red carnations to adorn altars and tombs. 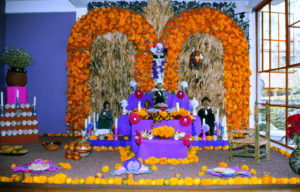 “The ofrenda or offering, which is the center piece in the manifestation of homage to the dead, has gone through many changes and transformations. Until thirty years ago, it was customary to place the offering in the cemetery next to the tombs. This kind of tradition is still seen in many small towns around the country, but in the capital, the offerings are placed in museums and art galleries, entrusting the work to artists who create the different subjects or motifs. These truly artistic designs are filled with a profusion of aromas and colors in which the flower of the season — the cempasuchitl — is the star.

“As the 20th century came to a close, the local government of the Federal District organized the Offerings of the Millennium on November 1st and 2nd at the Plaza de la Constitucion. It was an event full of music, offerings, and contests for Day of the Dead bread and literary poems. 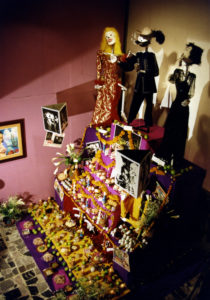 “The Zocalo of the capital was divided into four areas to celebrate this tradition. In one such zone, participants were able to witness the exposition of the different offerings created by the 16 city districts, as well as the extensive offerings in honor of the “forgotten ones,” a project developed by residents of the Tepito neighborhood. In an-other area, the Bread Museum exhibited traditional breads of the entire country. Near by, people were summoned to participate in an array of contests: industrial Day of the Dead bread versus the homemade type, which is baked in traditional wood-burning ovens. In the third area another great offering was created and 400 tombs were erected with distinct characteristics not seen in foreign cemeteries. In the final fourth area folkloric dancers, musical bands, and singers performed.

“Three processions were organized as part of the cele-bration of the Offering of the Millennium; one departed from the Palacio de Bellas Artes, the second from Plaza de Santo Domingo, and the third from La Merced neighborhood and they all congregated at the heart of the city: the Zocalo, or Plaza de la Constitucion.

“At night on November 1st and 2nd, once the street-lights had been turned off, tons of cempasuchitl and thousands of lit candles created a surreal setting which those present at the last Offering of the Millennium shared.” 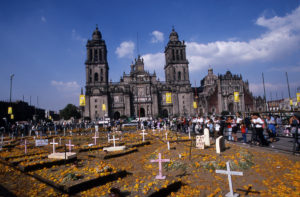 “Throughout this book, Mary Andrade renders us a visual account that allows the reader to discover and enjoy— through altars and offerings — the multitude of colors, foods, and artistic creations of the Mexican people. She takes us by the hand through her spendid photographs and her inviting narrative to witness the uniqueness of the Day of the Dead celebrations in Mexico City, Mixquic, and various towns in the State of Morelos,” writes Maria Esther Schumacher.

Through the Eyes of the Soul, Day of the Dead in Mexico ~ Mexico City, Mixquic & Morelos ~