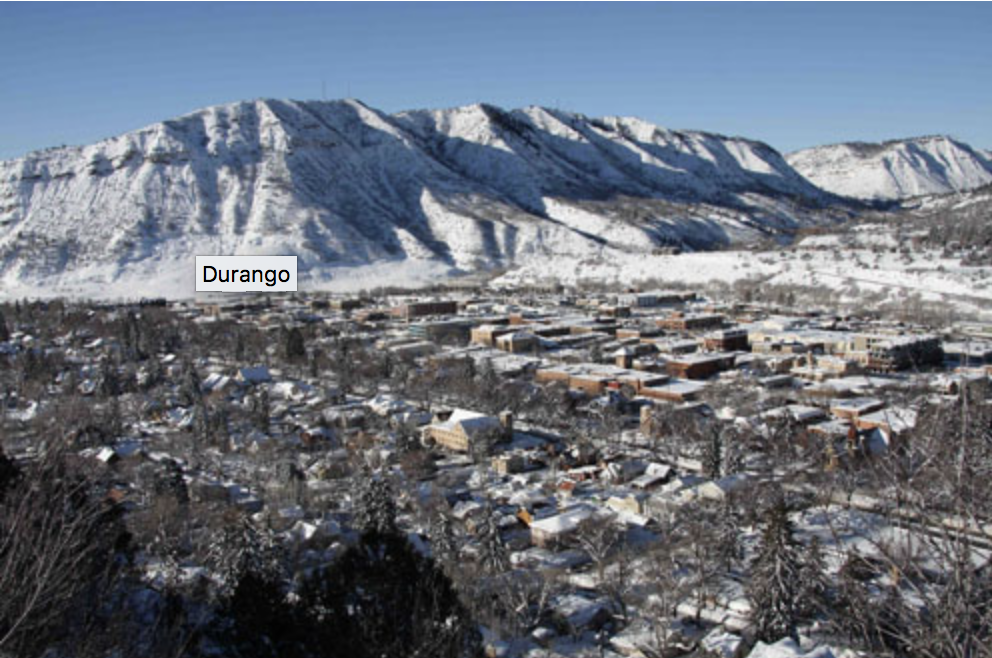 Text and photos by Bob Schulman

Think of an Old West town up in the mountains of southwest Colorado, and it would probably look a lot like Durango. But this is no ordinary picture-postcard of a spot where you might expect to find Butch Cassidy and the Sundance Kid high-tailing it with a Pinkerton posse at their heels.

For one thing, Durango has a 130-year-old super-attraction that draws 140,000 visitors a year – close to 10 times the number of people who live here.

Wander around town and at certain times of the day you’ll hear steam hissing and the click-clack of old-time railroad wheels. The sounds are from one of the oldest still-operating railroads in the U.S. on its only line: a 45-mile run between Durango and the historic mining town of Silverton. 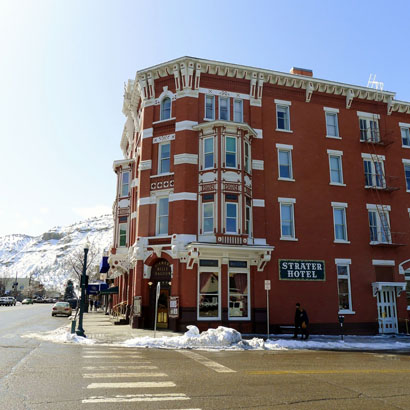 Head down to the vintage train station and it’s easy to imagine it full of miners lured to these parts by the gold and silver boom of the 1880s. They came from across the nation and from around the world, many ending up on the Denver & Rio Grande (D&RG) Railroad from Denver to Durango, where they hopped on another DR&G train to the heart of the boom in Silverton.

The latter run took the better part of a day as the steam-powered train chugged along a narrow gauge track with rails three feet apart – it was a lot cheaper and quicker to build than the much wider standard track – up the hillsides of the San Juan Mountains, sometimes edging 400-foot drops down to the Animus River. 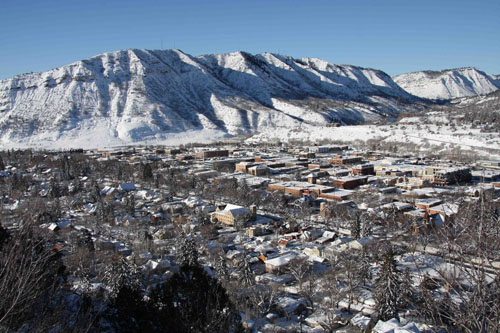 At Silverton the boys took a little R&R in the town’s three blocks of honky-tonk saloons, gambling joints, dancehalls and bawdy houses before heading out to start digging for the shiny stuff.

Fast forward to today and the mines have mostly played out, the shady ladies of Silverton’s red light district are long gone and the card sharks are tucking their aces away in a lot hotter place.

But the train is still full of passengers. Only now they’re tourists who’ve come to not only enjoy the ride but also to mosey around Silverton’s restored saloons and all the other trappings of the way things were in the late 1800s. 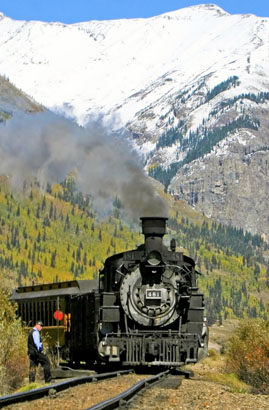 The summer run takes three and a half hours each way, and it’s packed with sensational views of the San Juans and wildlife like deer, elk and eagles. In Silverton, passengers have a little over two hours to explore the town and chow down in local restaurants.

In the winter, the train rolls out of Durango for a two-hour scenic ride to a place called Cascade Canyon where it sits for an hour or so and then returns to Durango.

Back in town, the passengers head off to the half-dozen or so blocks of shops, restaurants, museums, art galleries and hotels lining Durango’s Main Avenue. There, they rub elbows with other visitors stopping off on their way to popular tourist destinations such as the Purgatory resort area and Mesa Verde National Park, both less than an hour’s drive away.

Getting there: Visitors mainly get to Durango by car on U.S. and state highways and on jet flights from terminals at Denver, Phoenix and Dallas/Ft. Worth.

Staying there: Durango has 32 tourist-class hotels with a total of 2,500 rooms. Among historic properties is the iconic 93-room Strater Hotel, which looks much like it did – inside and out – when it opened in 1887.